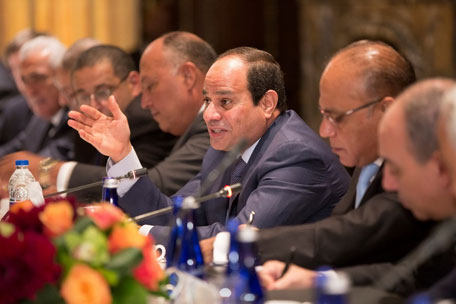 The U.S. Chamber’s U.S.-Egypt Business Council in cooperation with the American Chamber of Commerce in Egypt and the Egypt-U.S. Business Council hosted His Excellency, Abdel Fattah Al Sisi, President of the Arab Republic of Egypt, for a roundtable in New York City with U.S. CEOs and business executives to discuss the business environment for American companies in Egypt and the overall bilateral economic relationship.

President Sisi made clear that supporting economic growth in Egypt and having American businesses investing and engaged in the market is a priority for his Administration. The President opened by noting the long-standing cooperation between the U.S. and Egyptian business communities. He pledged that U.S. companies are “always welcome to invest and participate in projects in Egypt.” He cited the work being done by Blumberg Grain and GE as two examples of American companies making important contributions in food security and power generation respectively.

President Sisi spoke of both the accomplishments achieved to date as well as the many promising opportunities in Egypt, including the Suez Canal Corridor economic and industrial zones, and noted that the government continues to work to create a more attractive climate for business and investment by reforming regulations governing capital, taxes, industry, and labor. The President was interested in hearing directly from the represented companies as to whether his government was fulfilling its promises to make reforms conducive to doing business and investing in Egypt. Besides the Egyptian market, he pointed out that the country is ideally situated geographically to serve as a hub for Africa and the Middle East and companies can draw upon a skilled and educated workforce.

“We are determined to move fast and want to work with American companies,” asserted President Sisi. The President’s encouraging message and clear invitation to U.S. businesses set a positive tone for the U.S. Chamber’s and AmCham Egypt’s continuing program of work focusing on promoting the strategic bilateral relationship.